You tend to find that, once word gets out that you are interested in old bikes (and tend to amass them), they start coming out of the woodwork. As Adam was loading up his spoils (6 bikes – a different blog post) from an auction in Illinois, he was approached by someone who had 4 70’s Hondas sitting in his barn he was wanting to get rid of. While we weren’t looking to collect more, it was a price that couldn’t be passed up. He sent through some pictures, and we were sold. Adam and I took a trip and picked these up from central, rural Illinois (where I’m from originally). 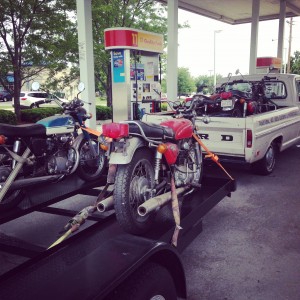 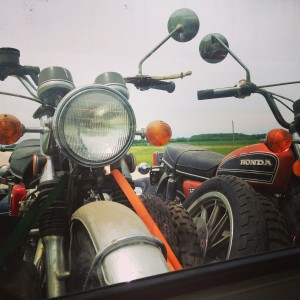 We ended up with two CB350s, one CB450, and one CB125. The CB125 was the only bike that had been ridden regularly by the owner’s nephews. The other 3 had been purchased at various estate sales, and, as is usually the case, he had planned on getting them running again but never got around to it.

After we got it running well, I had some fun on the CB125 around town for a while (and it was fun), all in the interest of testing it out before we sold it. If I have to… (btw, we carry Biltwell helmets and bubble shields in the shop – I love mine!) 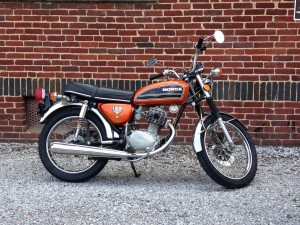 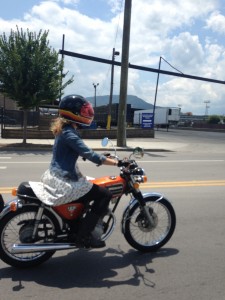 It was sad to see it go, but we sold it to a young man near Birmingham as his first bike. It’s funny – we saw it a couple of weeks ago at the Barber Vintage Festival, sitting on the side of the road. As we walked up to it to see if it was indeed “our” CB125, the owner walked up, and we had a chance to chat with him for a while. He was loving his bike, but, considering he was over 6 foot tall, I’d imagine he’ll be looking for an upgrade for next season.

The CB450 was featured in the motorcycle gallery and is being admired around Chattanooga.

The blue and white CB350 on the trailer in the photo above will be restored. It’s been torn down and is just waiting for its chance to receive some attention. The plan for the red CB350 has not been finalized, although it too has been torn down and is waiting for some attention. It is up for grabs if anyone’s looking for a CB350 that they want to ride…now’s the time to get it because you’ll have a chance to decide how it turns out!

If you’re wondering what’s been happening with my Ironhead, not much since I posted last….it’s waiting for its turn and a little cash infusion.

Will keep you updated on the CB350’s as they evolve.

Surprises while Sanding with Scott